Motive Studios EA was established in 2015 and is an EA video game studio with a wonderful team of passionate people who want to make great games beloved by players. Their latest release, STAR WARS™: Squadrons, is one of many EA titles they have worked on, and they have quite a few other projects currently in the works.

“By using QR Code Generator, we were able to provide an easy-to-use solution leveraging a QR Code which did not negatively impact our players’ experience.”

Motive Studios wanted to implement an update announcement tool in-game for their PC and console game Star Wars: Squadrons that would conveniently inform players without interrupting the gameplay. Ideally, this tool would redirect players to view more detailed information without requiring them to pause and exit mid-game in order to access any notification. They found QR Codes to be the perfect solution.

QR Codes were the all-in-one solution

By using QR Code Generator PRO, Motive Studios EA was able to provide an easy-to-use solution leveraging a QR Code that did not negatively impact the players’ in-game experience. Now, for every new update within the game, a QR Code is shown on an interstitial which players can access using a mobile device. By scanning the Code, they are redirected to a dedicated mobile-optimized page to view more detailed information about what’s changed without having to stop playing.

In addition, the QR Code provided them with the chance to give more fun facts and information about in-game items. For example, below the depiction of new starfighters and custom matches, a QR Code, once scanned, led players to a webpage to learn more about the illustrated items. 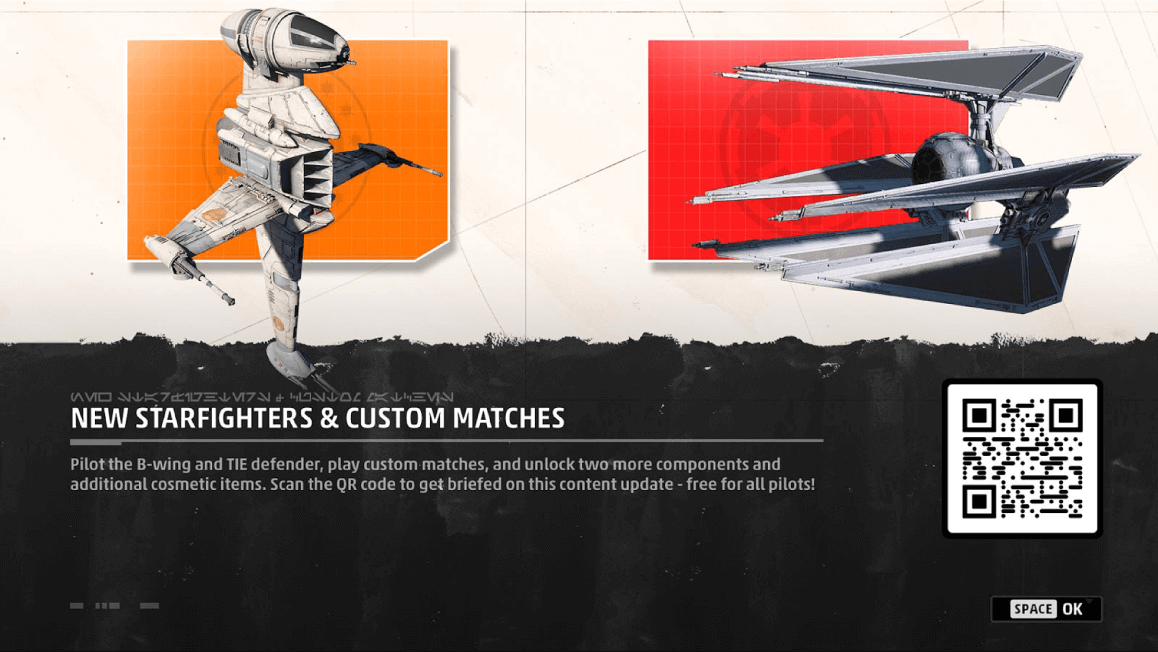 After implementing QR Codes, Motive Studios EA saw an immediate jump in their web metrics. This insight gave them access to understand what was working, what wasn’t, and the areas they could improve on. This was especially helpful in allowing them to find a new way of providing information for players who were less tuned in to their social media channels.

Juan Zacarias, Product Manager at Motive Studios EA, adds, “by far the most helpful feature was the ability to use the same QR Code and only need to change the URL on the backend. That allowed us to make interstitial assets well in advance since we knew the QR Code would be the same as always. Just make sure you set a reminder to update the link!”

Try QR Code Generator PRO free for 14 days or contact us for your enterprise requirements.
Get Started for Free