Get more out of your marketing with QR Codes for Christmas marketing campaigns. Experience the maximum audience reach, a boost in sales, better brand awareness, and more!

How to use QR Codes in Christmas celebrations

90% of Americans celebrate Christmas, and so does a good portion of the world, making it one of the most celebrated holidays. As a result, Christmas has become an important marketing opportunity for businesses and a fun way for families to join in on the merriness. Discover how you can add QR Codes to your marketing efforts as well as for personal use. 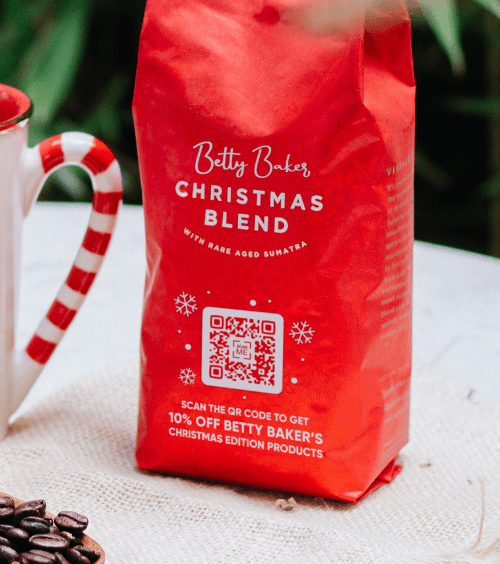 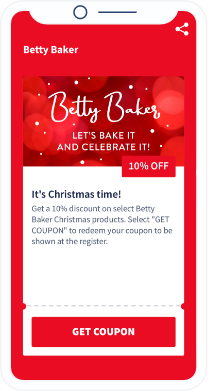 Customers are always searching for the best deals on gifts for loved ones. Add a Coupon QR Code on your store window, packaging, web banner, basically anywhere where a potential buyer might see it to redeem the Christmas offer. Plus, you’ll also save on print costs as you only have to print the QR Code once. If you’d like to change the coupon code or extend its validity, just log into your account, make the edit, hit save, and the changes will be reflected immediately. 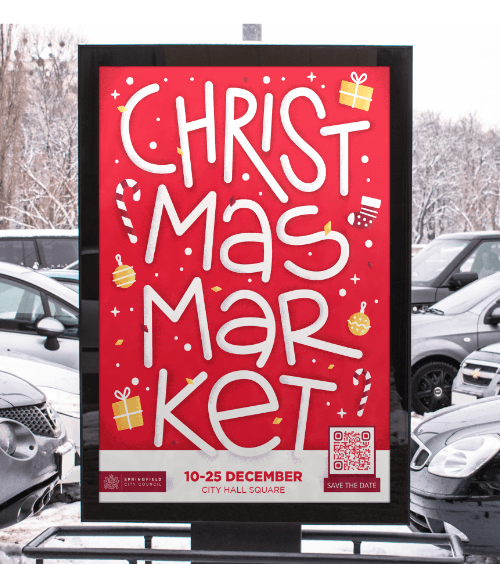 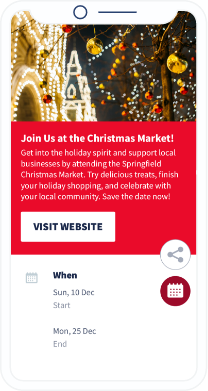 Cities often host their own Christmas markets, parades, and festivals. If you’re planning a similar event, spread the word easily by adding an Event QR Code on your poster or flyer. Those interested in attending your event can scan the QR Code, view all the event details, RSVP, and save the date to their digital calendar so they won’t miss it. Plus, your event can instantly be shared on social media, email, and even text message with one quick tap. 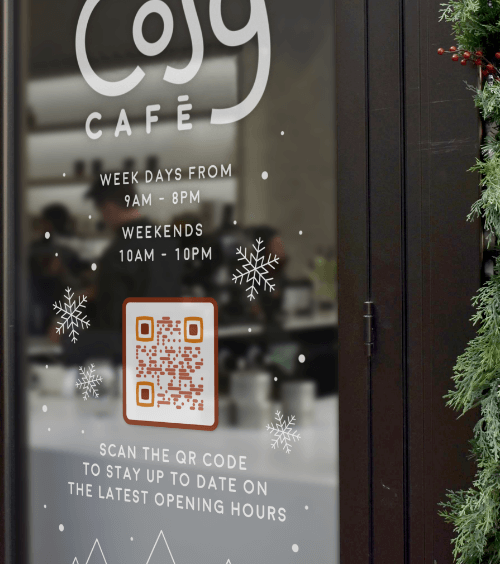 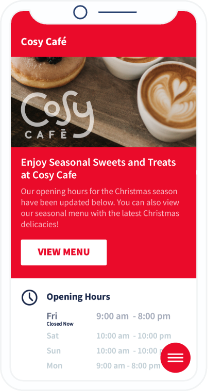 Depending on the industry, some businesses are open longer, and some are closed during Christmas. Your normal business hours are likely printed on your office window or door permanently, so how do you ensure your customers are informed about the latest hours without always printing new ones? Simply use a Business Page QR Code to display the latest operating hours so that your customers are always up-to-date. 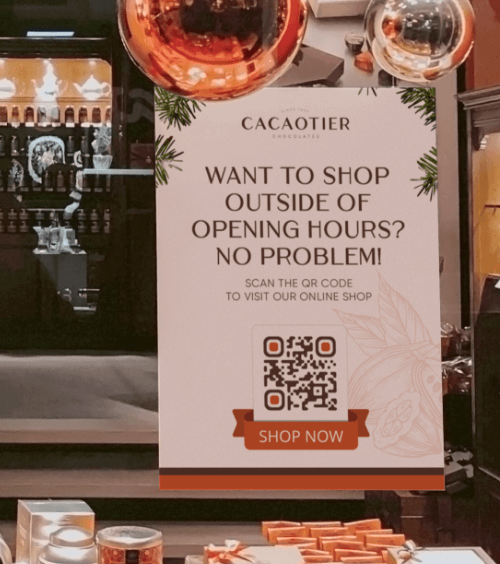 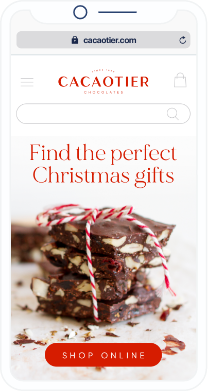 Launching new products ahead of Christmas is the best way to boost sales as they are likely to be given away as gifts. Store window displays and TV commercials make it easy to promote these products, but why not take a step further by adding a Dynamic URL QR Code that customers can scan to make an immediate purchase? It automatically brings your customers to your online store or the nearest store to purchase with a quick scan without having to type the long URL manually. 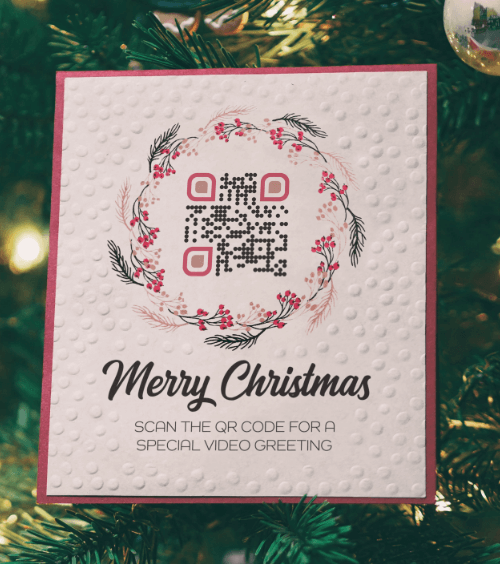 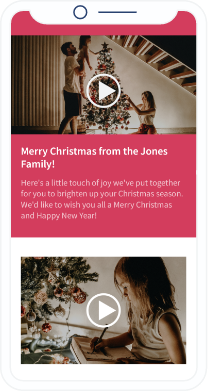 It’s a common tradition in the US to send a family photo as a Christmas card to friends and relatives. You can make your message much more memorable by replacing the family photo with a Video QR Code. Simply upload your family video to Youtube (unlist it to make it private, if you like), copy the URL to turn it into a QR Code, and add it to your card. Plus, you can always update or add more videos to the QR Code even after you’ve sent the card if you changed your mind.

Why should you use QR Codes for Christmas?

More than two-thirds of consumers go holiday shopping during the first two weeks of December, which means that you, as a business, need to start your Christmas campaigns immediately after Black Friday. When you combine that with the fact that 64% of smartphone shoppers use mobile search before heading to the store, QR Codes are soon to become your new best friend for marketing.

The overall goal of using a QR Code is to send your target audience to mobile platforms and apps after being scanned via smartphone, which works for both print and digital mediums. So, you should take advantage of this opportunity to reach as many customers as possible to drive Christmas sales.

Tips to make your Christmas marketing campaign a success

Along with a hearty ho, ho, ho, from Santa Claus, your Christmas marketing campaigns with QR Codes should account for a few specific details to get the best result.

Design according to the season

Tap into the Christmas spirit by updating your marketing collateral to fit the holiday mood. Use appropriate colors such as white and red, motifs such as snowflakes or reindeers, and you’ll be sure to prepare your customers to spend more.

Offer gifts that keep on giving

74% of shoppers state that the most appealing promotional offers for Christmas are price discounts. So if you want to end the year with a bang, you need to focus your campaigns on large-scale and bundle discounts that shoppers can purchase as gifts. It’s a gift for them as they don’t have to reach deep into their wallets to spend, and it’s a gift from them to their loved ones that they can cherish for a long time.

Cater to the holiday rush

When you combine a discount with scarcity marketing (limiting purchase amounts) over the short time frame leading up to Christmas, you’ve got the number one strategy for attracting holiday shoppers. While the largest rush is in the first few weeks leading up to Christmas, you can escalate the FOMO (fear of missing out) by giving the biggest discounts a few days before Christmas. While some shoppers plan out gifts, others wait until the last minute. This way you reach both audiences by encouraging them with the concept of “while supplies last” and “available for a limited time only.”

Another point to keep in mind is that Christmas is a special time of the year. Shoppers are also looking for special types of products that aren’t practical or useful in other seasons. You may also want to consider creating a line of products that’s only available during the Christmas season, such as Advent calendar products that are super popular only once a year.

An overview on Christmas traditions & history

Christmas has a history that dates back thousands of years, so it makes sense that it’s also steeped in cultural traditions. One of the most widely celebrated holidays around the world, here is a deeper look into how the concept of Christmas began and how it’s related traditions developed.

When is Christmas celebrated?

When did Christmas begin?

The concept of the birth of Jesus occurring on December 25th has unclear origins, especially because the New Testament doesn’t mention anything about this topic. It was only later in 221 AD that the birth of Jesus on this date became the universally accepted date according to Sextus Julius Africanus, the first Christian scholar to document a universal chronology.

One popular explanation for his thinking involves the integration of “Christmas” with the Roman holiday known as Saturnalia, which was celebrated on the week prior to winter solstice. When Christianity was a new religion, Easter was a much more prominent holiday and the celebration of Christmas as we now know didn’t exist. However, as the Roman Catholic Church grew in power, Pope Julius I named December 25th the birth of Jesus in order to absorb some of the more pagan traditions related to Saturnalia. Originally referred to as the “Feast of the Nativity”, traditions surrounding the holiday became so popular that it quickly spread across Egypt and England, and then later on across Scandinavia.

Christmas took hold on a global scale after Charles Dickens published “A Christmas Carol” in 1843, which intertwined the Christmas holiday with charity and goodwill towards mankind. As families became more aware of children’s emotional needs during the 1800s, Christmas also took on a new form that involved lavishing children with gifts without “spoiling” them too much.

That same idea took hold in America and became popularized throughout both the Christian Church and among families. This involved giving all family members gifts, decorating trees, sending holiday cards, and visiting the church for Christmas Eve mass.

Although he only became popular in more recent times, the idea of Santa Claus stems back to 280 AD in Turkey with a monk named St. Nicholas. He was well known for traveling the countryside and giving away his inherited wealth to the poor and sick, as well as protecting children.

In 1822, the poem “An Account of a Visit from St. Nicholas” written by Clement Clarke Moore described Santa Claus as a jolly old man who flew around on a sled led by reindeer and gave out toys to children. Later on, in 1881, Santa Claus was shown wearing red and white and was toting a long beard in a political cartoon drawn by Thomas Nast that appeared next to the published poem. And the rest was history.

Which country started the tradition of decorating Christmas trees?

As huge celebrators of Christmas, Germany is credited with starting the tradition of decorating Christmas trees during the 16th century. One theory is that Martin Luther, the Protestant reformer, added lit candles to a Christmas tree one evening and composed a sermon that awed his audience with the brilliance of the twinkling lights. A few hundred years later, German settlers in America brought the idea of decorating Christmas trees along with them, which was then popularized across American society.

As long as you’ve chosen Dynamic QR Codes, you can edit the content on your display page (or your link in the case of a Dynamic URL QR Code) at any time without having to create a new QR Code. However, if the material you’ve used the QR Code on was specifically for a Christmas marketing campaign, you may need to update the QR Code designs so that it matches with your new medium. In either case, you can change your QR Code as many times as you like.

This depends on your Christmas marketing campaign goals. We have different types of QR Codes, such as to share websites, videos, images, sound files, PDFs, and much more. Follow the examples above so you can replicate them for your own Christmas campaigns. 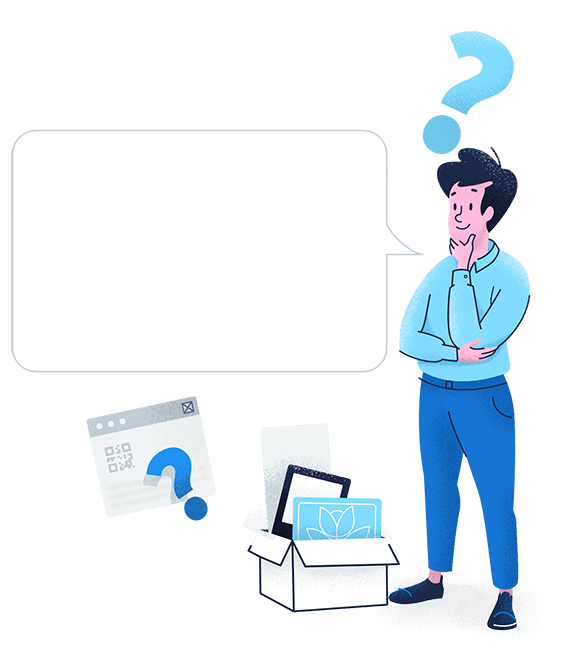 Get started with a 14-day free trial now!
Sign up now

With QR Codes, you can quickly build your online and offline followers, get feedback from your customers, increase traffic to your website, and many more.