QR Codes are Kicking it With Pepsi & Other News

While Pearl Jam is putting its fans on the moon, Pepsi is letting users play keepie uppie with their favorite soccer stars, all thanks to QR Codes.

Is it okay to dine ‘n dash?

The new “Scan to Pay” feature lets customers dine ‘n dash at the end of their meal. Instead of handing a card over to the server, restaurant guests can scan a QR Code at the bottom of their bill to pay with Apple Pay.

Not only is this a quick and convenient solution for both the customer and the venue, but it also adds an extra layer of security with features such as Face ID.  Read the full story.

The new limited edition packaging features the likes of Lionel Messi, Paul Pogba, Mo Salah, and Raheem Sterling on Pepsi and Pepsi Black/MAX cans. The cans will also feature QR Codes that consumers can scan to unlock augmented reality (AR) versions of the soccer players. Participants can then compete with their favorite legend in a game of keepie uppie. Read the full story.

Starbucks and McDonald’s get smart with QR Codes

Soon, when you order your morning coffee at Starbucks or McDonald’s, it could be served to you in the same cup you used a few months earlier!

At least this is the vision behind pilot programs launched earlier this month. The project, known as NextGen Cup Challenge, has introduced two types of “smart” reusable cups to independent coffee shops in both San Francisco and Palo Alto. One of the models is printed with a QR Code on each cup, which consumers can scan when they pick up and drop off cups. Read the full story.

Pearl Jam got creative with the teaser for their new song, “Superblood Wolfmoon,” released on February 19. Fans were treated to a unique AR experience, which they could unlock by pointing their smartphones at the moon.

The promo encouraged fans to scan a QR Code on their smartphone to view the AR content on their mobile browser. From there, pointing their phone at the moon let them see an artistic depiction of a red lunar eclipse and pre-order the song. Read the full story. 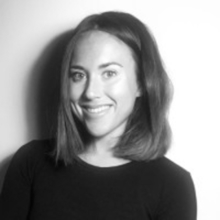 Katy Smith is a Freelance Social Media Manager for Egoditor GmbH, originally from London, UK. She now shares her time between London and Valencia, Spain, specializing in copywriting and social media strategy for markets across the globe.

Give your infographic marketing new dimensions by linking it to digital platforms with QR Codes.

Save your wreaths and discover innovative ways to reap the benefits of the QR Code's growing popularity!